Margaret Sayers Peden is an award-winning American translator and Emeritus Professor of Spanish at the University of Missouri. She has translated over thirty books of Spanish literature, including classics such as La Celestina and Pedro Páramo, and works by Isabel Allende, Carlos Fuentes, Octavio Paz, Arturo Pérez-Reverte and Pablo Neruda. 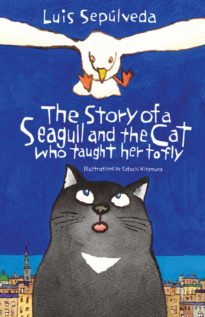 Caught up in an oil spill, a dying seagull scrambles ashore to lay her final egg and lands on a balcony, where she meets Zorba, a big black cat from the port of Hamburg. The cat promises the seagull to look after the egg, not to eat the chick once it’s hatched and – most difficult of all – to teach…