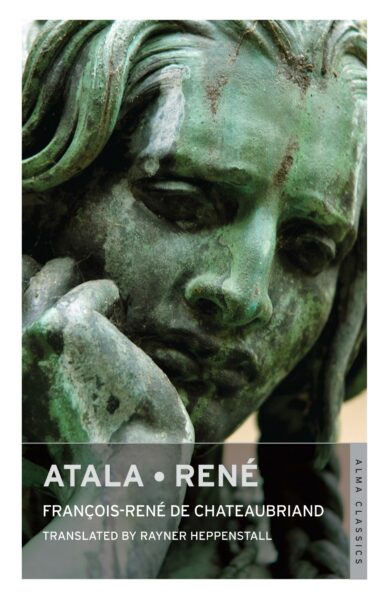 ‘Atala’, published in 1801, tells the tragic tale of the eponymous heroine, the mixed-race Christian daughter of a Native American chief, who saves the captured Chactas and tragically falls in love with him. ‘René’, published the following year, is the seminal portrait of the sensitive and world-weary young Romantic hero who attempts to flee civilization and pursue a life in the wilderness of Louisiana.

Referred to by their author as his passionate twins and intended to provide an illustration of the original, primitive virtues of Christianity, the two novellas were hugely successful in their time, thanks to their vivid depictions of exotic locations and their attunement to the emotional sensitivities of the age. They also helped shape European Romantic archetypes which would bear resonance throughout the nineteenth century and profoundly mark its literature and art.

François-René, vicomte de Chateaubriand (1768–1848) was a French writer, politician and diplomat. He is considered the founder of Romanticism in French literature.