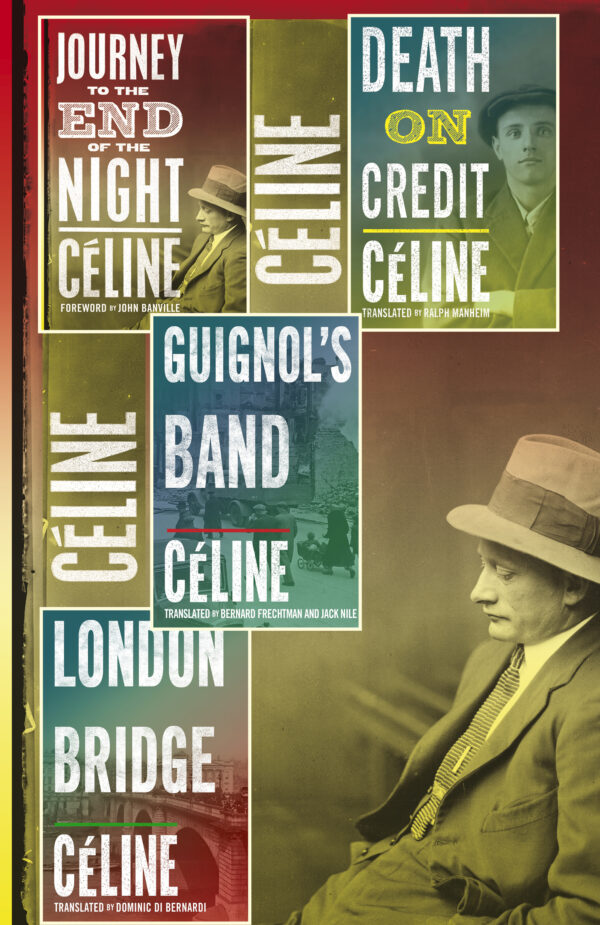 This collection includes four novels by Louis-Ferdinand Céline, one of the greatest twentieth-century novelists.

‘The prose stylist of the century’ – Tibor Fischer

‘Céline’s expletive-laden, first-person narration influenced Henry Miller, Charles Bukowski and Beat poetry. But the influences do not stop there: one cannot help but appreciate the palpable influence that the author’s anti-war invective and defence of cowardice had on Joseph Heller’s Yossarian and Kurt Vonnegut’s Billy Pilgrim respectively. But, the interest of those he influenced aside, Céline’s novel remains as readable and vital today as it was in the 1930s.’ – Times Literary Supplement

‘Born in the shadow of entrenched realism and naturalism, Céline ripped up the textbook. He wasn’t the first French writer to use a colloquial style, but he was the first to use it so relentlessly and powerfully, to create a brand, the rant, whether it was delirious, lyrical or raging.’ – The Guardian

‘Journey to the End of the Night, first published in 1932, is one of the greatest novels of the twentieth century … It could be said that without Céline there would have been no Henry Miller, no Jack Kerouac, no Charles Bukowski, no Beat poets’ John Banville

Death on Credit is a new kind of novel, frank about the author’s thoughts and actions in ways that readers had never encountered, ultra-realistic – and full of incidents that could not possibly be true to life, and characters that stretched the imagination.

First published in 1944 but dealing with events taking place during the First World War, Guignol’s Band follows the narrator’s meanderings through London after he has been demobilized due to a war injury.