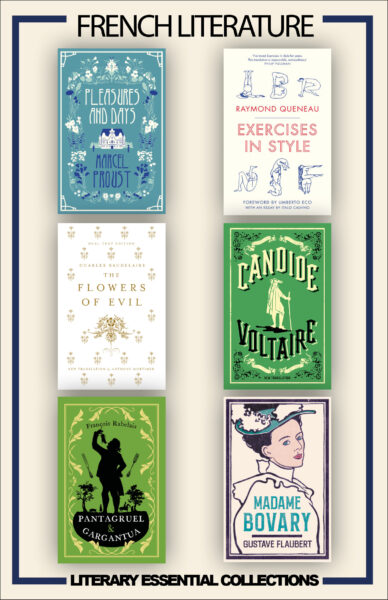 This collection includes six masterpieces from French literature, all presented in new translations:

The Flowers of Evil: Dual-Language Edition by Charles Baudelaire

Presented in a new translation by Christopher Moncrieff, this edition contains extra material including some photographs, notes and a select bibliography

Exercises in Style by Raymond Queneau

Exercises in Style retells this apparently unremarkable tale ninety-nine times, employing a variety of styles, ranging from sonnet to cockney to mathematical formula. This edition contains a foreword by Umberto Eco and an essay by Italo Calvino

Pleasures and Days by Marcel Proust

Pleasures and Days takes the reader on a journey through the high-society circles of fin-de-siècle Paris, presenting the lives, loves and attitudes of a host of unforgettable characters. Contains a foreword by A.N. Wilson

Pantagruel and Gargantua by François Rabelais

Presented in a new translation by Sander Berg, Candide is an exhilarating picaresque romp and a biting satire by one of the Enlightenment’s major figures that still resonates to this day.